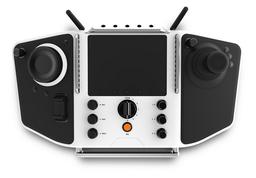 Pete Ayriss drone-training a horse before a stunt on My Cousin Rachel.

It may sound like I'm just an Aerigon fan – but I'm very much looking forward to using the Shotover U1 underneath their drone when it eventually takes to the skies. The Freefly Movi head is great too – it's just that the best shoots I've had when flying drones have been with the Aerigon kit. 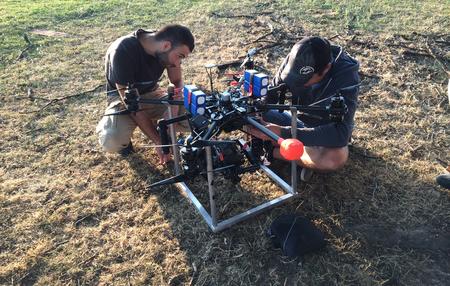 For a proper drone shoot, you will need a crew of three – the Pilot, a camera/drone-assistant and the gimbal operator. These shoots become very stressful – there's always some sort of compromise going on – be it due to weather; locations; changes of plan; overambitious directors or underplanning producers. For this reason, you need an experienced crew who know how to deal with these things.

This experienced crew comprises a pilot who knows their kit, the law and respects safety – so they know when to say no and when to say yes – and when they say yes, they can fly it well. An assistant who can set up the camera so that it's shooting the same format as the other cameras on the set – and keep card discipline, get the cards to the DIT so that we don't run out AND manage all the batteries. And finally, an operator who knows how aerial shots work and who has the time to discuss the shot with the Director or the DoP, without having to scurry back and forth needing a breathless briefing having gone back to see if the next set of batteries are full yet.


Bertrand (Assistant) and Mathieu (Pilot) prep their handbuilt equipped with Movi before take-off on The History of Love - Romania..

Ah yes, batteries. You have to think of them as being like petrol – in a very small tank. Everyone will tell you that the batteries on their heavylift drone last between nine and fifteen minutes. This is not true. They might last nine minutes on their first flight (and even then you are taking a real risk) – but if you want to land with a margin of safety (so that the pilot can actually plan their landing, as opposed to being obliged to put it down as quickly as they can) you'll only get about seven minutes. From their very first flight, the batteries' performance diminishes and this means that on average, flying a proper camera with a zoom lens, you're only going to get to get six minutes of flight.

Of course, a lighter camera package will mean that you can fly longer – but the flexibility offered by a zoom outweighs the PITA factor of changing lenses every five minutes.

This means that planning is vital – and your AD should have everybody ready BEFORE the drone goes up. Too often the drone gets sent up, then they call for action to be ready; then there's some final adjustment; then there’s a reaction to the adjustment and by the time they're ready to say “Action” there's only ninety seconds before the drone has to land.


The drone market, only a few years old, has changed enormously.  Four years ago they were hand-built monsters - all jutting carbon fibre and a mess of wires with wobbly gimbals underneath, they've now become a bit more civilised.

There are still hand-built models out there, but the market leaders are batch-built in factories with more and more safety features included.

The system I'm used to working with most is the Aerigon which with the arrival of the MKII is now coupled with the superb IAG3 gimbal.  It's very steady, coping admirably with turbulent wind and it can take proper payloads – including anamorphic zoom lenses with all lens controls.  They've also just launched the Dominion – at last a control console that isn't a flaky RC controller.  I'm sorry, but the feeling/feedback from those things didn't really cut it.